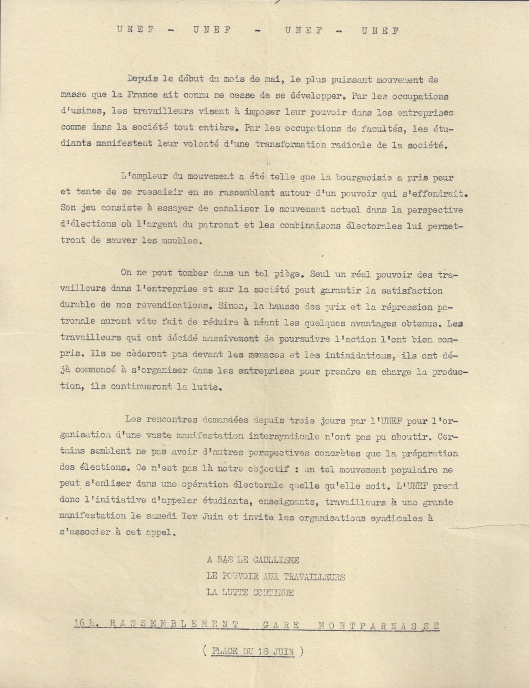 Since early May, the most powerful mass movement that France has ever known has continued to grow. By occupying the factories, workers aim to impose their authority in industry as well as on the whole of society. By occupying the faculties, students are demonstrating their determination to radically transform society.

The breadth of the movement has been such that the bourgeoisie became frightened and is now trying to pull itself together by rallying around a government which was breaking down. its game consists in trying to canalize the present movement, with a view to elections in which the employers’ money and election combinations will allow it to save the essentials.

We cannot fall into such a trap. Only real worker authority in the factories and in society can guarantee lasting satisfaction of our demands. Otherwise the rise in prices and employer repression will quickly reduce to nothing the few advantages that have been won. When the mass of workers decided to pursue their action they understood this very well. They will not give in to threats and intimidation; they have already begun to organize to take over production in the factories, and they will continue the fight.

The consultations requested by the UNEF for the last three days, with a view to organizing a broad inter-union demonstration, could not take place. Certain people seem to have no concrete outlook beyond preparing for the elections. This is not our objective, a popular movement of this kind cannot get bogged down in any electoral operation whatsoever. The UNEF is therefore taking the initiative of calling on students, teachers, and workers to come to a large demonstration on Saturday, June 1, and is inviting the union organizations to join in this call.

DOWN WITH GAULLISM!
POWER TO THE WORKERS!
THE FIGHT CONTINUES! 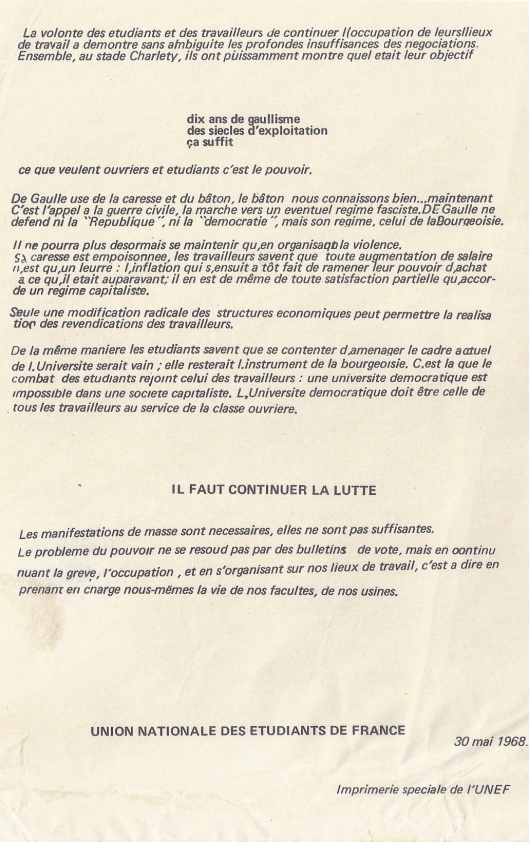 The desire of the students and workers to continue the occupation of their workplaces has unambiguously demonstrated the profound deficiency of the negotiations. Together, at Charlety Stadium, they powerfully showed what their objective was

what the workers and students want is power.

De Gaulle uses the carrot and the stick, we understand the stick well… now. It is the call to civil war, the march towards a potential fascist regime. De Gaulle defends neither the “Republic” nor “democracy”, but his regime, that of the Bourgeoisie.

From now on he will only be able to remain by organising violence.

His carrot is poisoned, the workers know that any increase in wages is only a decoy, inflation will quickly bring their purchasing power back to the level it was before; it is the same with every partial concession a capitalist regime agrees to.

Only a radical change in economic structures can allow the demands of the workers to be met.

In the same way the students know that being satisfied with the rearrangement of the current framework of the University would be useless; it would remain the tool of the bourgeoisie. It’s here that the fight of the students joins with that of the workers: a democratic university is impossible in a capitalist society. The democratic University must be that of all workers at the service of the working class.

THE STRUGGLE MUST BE CONTINUED

Mass demonstrations are needed, but they aren’t enough.

The question of power isn’t resolved by ballots or votes, but by continuing the strike, the occupations, and by organising in our places of work; in other words by taking the responsibility for the life of our faculties, of our factories for ourselves. 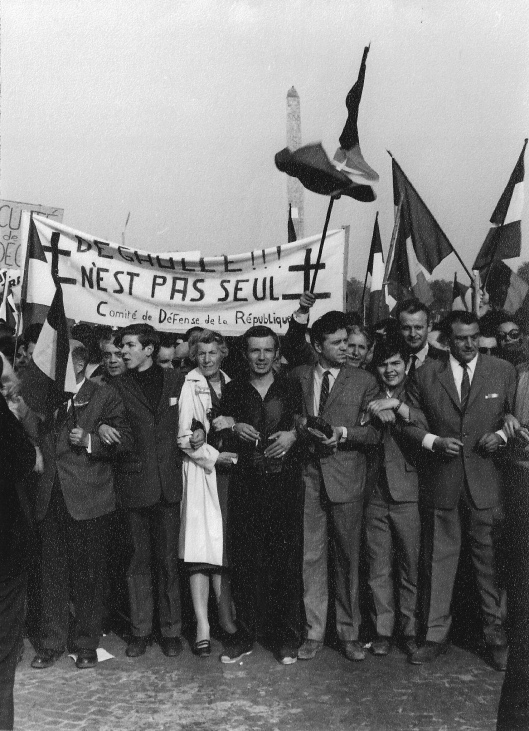 From rear of photograph: 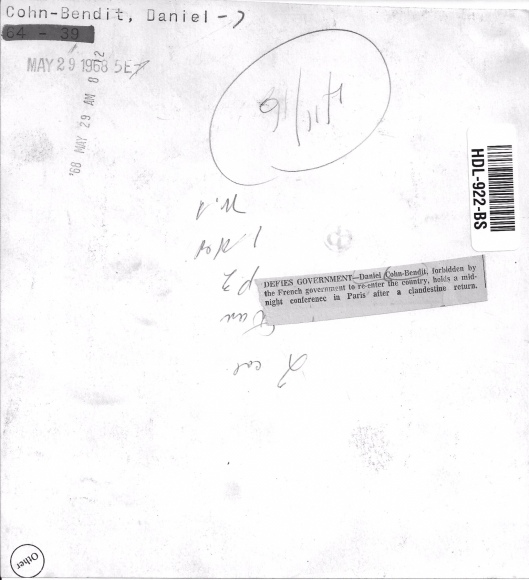 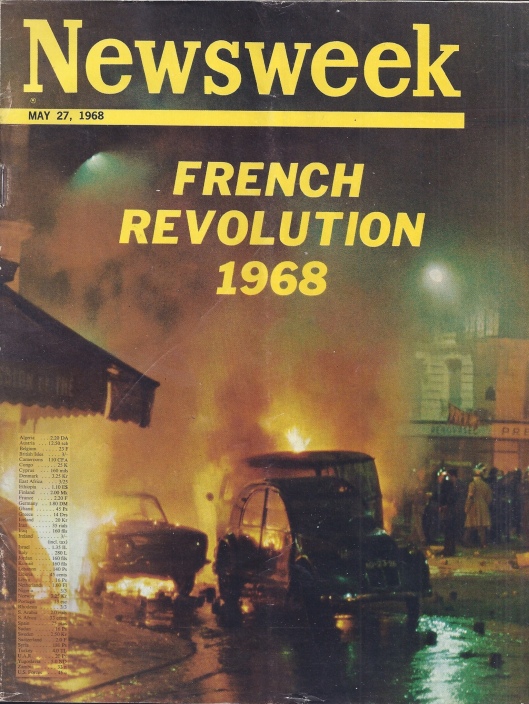 (Click on image to view PDF of full document) 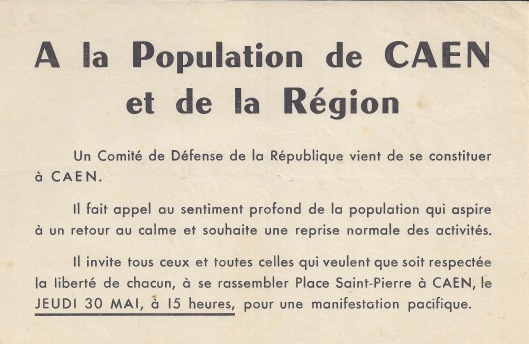 To the People of CAEN
and of the Region

A Defence Committee of the Republic has just been established in CAEN.

It appeals to the deep feeling of the people who yearn for a return to tranquility and hope for a resumption of normalcy.

It invites all men and all women who wish to agree to respect the freedom of everyone, to gather at Place Saint-Pierre in CAEN, on THURSDAY 30 MAY at 3pm, for a peaceful demonstration. 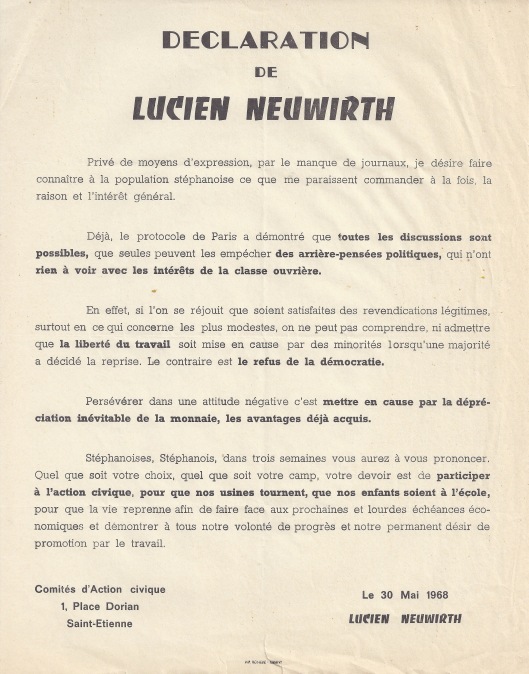 Deprived of the means of expression, through the lack of newspapers, I wish to inform the population of St. Etienne of what appears to me to be of general interest.

Already, the Paris Protocol has demonstrated that any discussion is possible, and that the only thing which can stop them are ulterior political motives that have nothing to do with the interests of the working class.

Indeed, if it is agreed that legitimate claims have been satisfied, especially for the more disadvantaged, it cannot be neither understood nor accepted that the freedom to work is challenged by minorities when a majority has decided to return to work. Rather it is the denial of democracy.

To persist with a negative attitude is to jeopardise the benefits that have already been realised, through inevitable inflation.

Men and women of St. Etienne, in three weeks you will have to decide. Whatever your choice, whatever your camp, your duty is to participate in civil action, so that our factories are running, our children are in school, so that life is resumed in order to face up to upcoming, heavy economic commitments and demonstrate to all our desire to progress and develop through work. 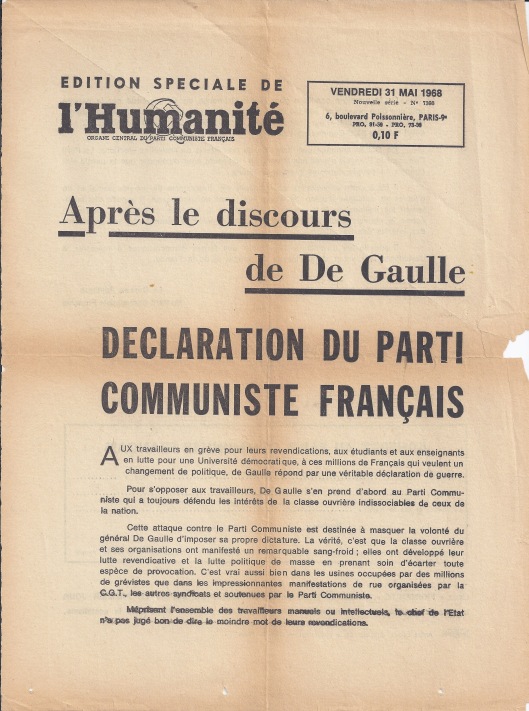 DECLARATION OF THE
FRENCH COMMUNIST PARTY

With Workers on strike for their demands, with students and teachers in a struggle for a democratic University, with millions of the French people wanting a change of policy, de Gaulle responded with a veritable declaration of war.

in his opposion to the workers, De Gaulle first takes on the Communist Party which has always defended the interests of the working class, inseparable from those of the nation.

This attack against the Communist Party is designed to mask the wish of General de Gaulle to impose its own dictatorship. In reality, the working class and its organizations have shown remarkable composure; they have developed the fight for their claims and theit mass political struggle taking care to avoid any kind of provocation. This is true in both the factories, occupied by millions of strikers, and in the impressive street demonstrations organized by the C.G.T. and other unions, supported by the Communist Party.

Scorning all workers, both blue- and white-collar, the head of State did not judge it worth saying a word about their claims.

However, the first condition for settling the huge conflict caused by the harmful policies of a State at the service of corporations, is to uphold the legitimate demands of the workers. This is the unanimous demand of the unions. It is also that of the French Communist Party.

De Gaulle announced his intention to call new elections. The French Communist Party has not been waiting for this speech to demand that the people be given their say as soon as possible.

The Party will go to this compaign explaining its program of social progress and peace and it’s policy of the democratic unity of all forces. It now calls upon the millions of Frenchmen and Frenchwomen for their trust, to defeat the Gaullist government; and to establish a true democracy that serves the interests of workers.

It calls on workers, to join strongly with the democratic forces, to develop their unity in the interests of the people and France.

The Political Bureau
of the French Communist Party
May 30, 1968. 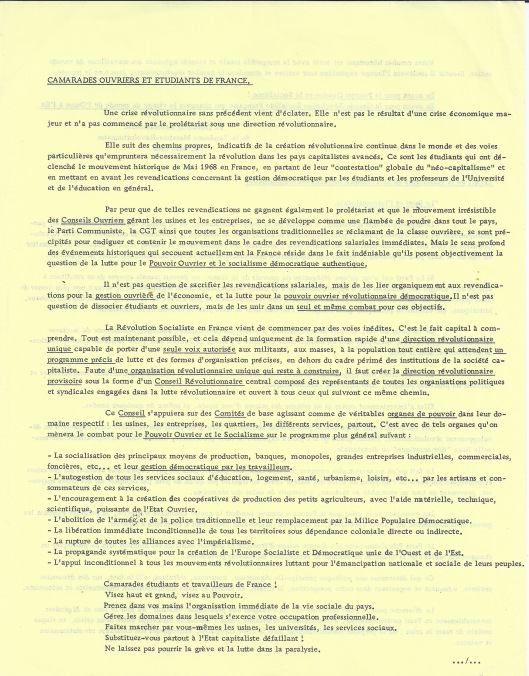 COMRADES WORKERS AND STUDENTS OF FRANCE

An unprecedented revolutionary crisis has just broken out. It is not the result of a major economic crisis and was not started by the proletariat under a revolutionary leadership.

It is following its own path, which points to the continuation of revolutionary creation in the world and the particular courses that revolution will follow in advanced capitalist countries. It was students who launched the historic movement of May 1968 in France by starting out from the total rejection of “neo-capitalism” and by putting forward demands concerning the democratic control of the universities and education in general by students and teachers.

Fearing that similar demands might reach the proletariat as well and that the irresistible movement of Workers Councils running the factories and businesses might spread like wildfire through the country, the Communist Party, the CGT and all the other traditional organizations who associate themselves with the working class rushed in to stem the tide of the movement and contain it within the framework of immediate wage demands. But the real meaning of the historical events that are presently shaking France is to be found in the undeniable fact that they objectively pose the question of the struggle for Workers Control and genuinely democratic socialism.

The Socialist Revolution in France has just begun, in an unprecedented way. This is the essential fact to understand. Everything is now possible and depends entirely on the quick formation of a united revolutionary leadership capable of speaking with the authority of one voice to militants, to the masses and to the whole population, which is waiting for a precise plan of struggle and precise forms of organization, which will go beyond the obsolete framework of the institutions of capitalist society. Because there is not yet a united revolutionary organization, the provisional revolutionary leadership must be created in the form of a central Revolutionary Council, made up of representatives of all the political and trade-union organizations committed to the revolutionary struggle and open to all those who will follow this path.

This Council will rely on the support of grass-roots Committees, which will act as real organs of power in their respective fields: factories, businesses, neighbourhoods, various services – everywhere. It is by these means that the struggle for Workers Power and Socialism will be carried on following the programme set out here:

– The socialization of the principal means of production, the banks, the monopolies, the big industrial, commercial and property-owning concerns, etc… and their democratic control by the workers.
– The democratic control of all education. housing, health, town planning and leisure services, etc., by the producers and consumers of these services.
-Encouragement for the creation of production co-operatives for small farmers with the powerful material, technical and scientihc aid of the workers state.
– The abolition of the traditional army and the police and their replacement by a democratic peoples militia.
– Immediate and unconditional independence for all territories under direct or indirect colonial rule.
– The breaking-off of all alliances with imperialism.
– Systematic propaganda for the creation of a Socialist and Democratic Europe united from East to West.
– Unconditional support for all revolutionary movements struggling for the national and social emancipation of their peoples.

Comrade students and workers of France!
Aim high and far, aim at power.
Take the immediate social organization of the country into your hands.
Take control of everything involved with your working life.
Run the factories, the universities, the social services yourselves.
Substitute yourselves for the decaying capitalist state!
Don’t let the strike and the struggle founder in paralysis.

Forward for Workers Power and Socialism.
Forward for the Great Socialist French Revolution that will change the face of the world from the West to the East.

The International Leadership
of the Marxist-Revolutionary Tendancy
27 May 1968