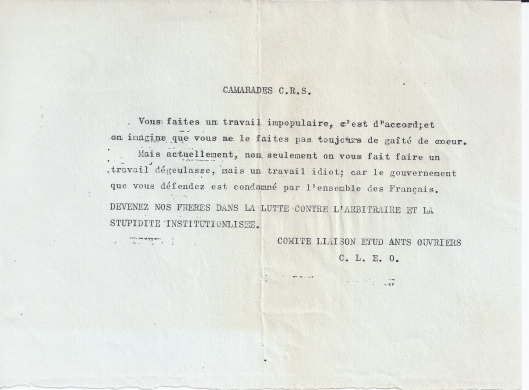 You do unpopular work, that’s OK; and we imagine that you don’t always do it willingly.

But currently, not only are you doing a revolting job, but a stupid one; because the government that you are defending is condemned by the whole of France.

BECOME OUR BROTHERS IN THE FIGHT AGAINST ARBITRARINESS AND INSTITUTIONALISED STUPIDITY 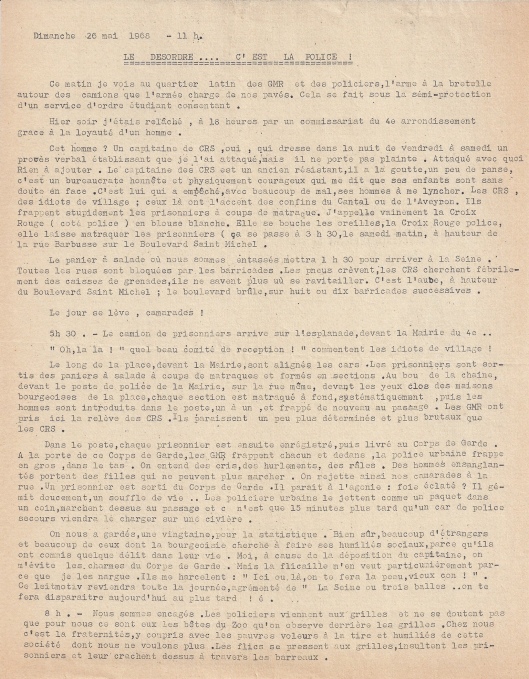 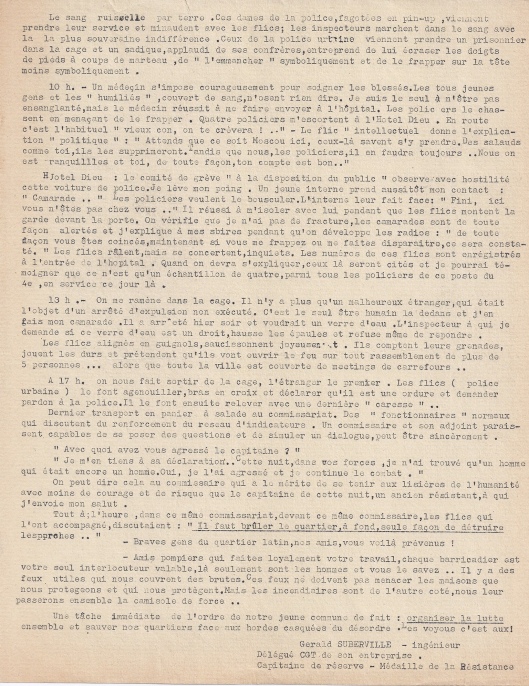 THE CHAOS … IS THE POLICE!

This morning I see the GMR and police in the Latin Quarter, guns on their shoulders, gathered around trucks that the army is loading with our paving stones. This is done under the semi-protection of a willing student security detail.

At 6pm last night I was released from a 4th arrondissement police station, thanks to the honesty of one man.

This man? A captain of the CRS, who made a report that on the night of Friday and Saturday I had attacked him, but who didn’t press charges. Attacked with what. Nothing to add. The CRS captain is a former Resistance fighter, he has gout, and is a bit paunchy, he is an honest and courageous bureaucrat who told me that his own children are probably on the other side. It was he who, with great difficulty, prevented his men from lynching me. The CRS village idiots have accents from the Cantal/Aveyron region. They senselessly beat their prisoners with batons. I vainly call to the Red Cross (on the police side) in their white coats. The police Red Cross block their ears, and allow the prisoners to be beaten (this is at 3: 30am on Saturday morning, at the top of Rue Barbusse on Boulevard Saint Michel).

The paddy wagon we are crammed into takes 1 hour 30 minutes to reach the Seine. All the streets are blocked by barricades. The tires burst; the CRS feverishly search for cases of grenades, they no longer know where to get fresh supplies. It’s dawn, at the top of Boulevard Saint Michel; the boulevard burns, eight or ten barricades in a row.

5:30am – The truck-full of prisoners reaches the esplanade in front of the Town Hall of the 4th ..

Police vans are lined up along the square in front of the Town Hall. The prisoners are thrown out from the paddy wagons with baton blows and are formed into groups. In front of the Police Station at the Town Hall and before the closed eyes of the bourgeoise houses around the square, each group is thoroughly and systematically clubbed. Then the men are taken into the Station one at a time and beaten again on the way in. Here the GMR take over from the CRS. They seem a little more determined and brutal than the CRS.

In the station, each prisoner is then registered and delivered to the Guardhouse. At the door of the Guardhouse the GMR beat each of us, and inside the city police give the crowd a wholesale beating. We can hear cries, screams, and groans. Blood-soaked men carry girls who can’t walk any longer. This is how our comrades are released into the street. A prisoner comes out of the Guardhouse. He seems to be in agony: a burst liver? He groans softly, a murmur of life .. The city police throw him into a corner like a sack, stepping over him as they leave. It’s not until 15 minutes later that a police ambulance will come to load him up on a stretcher.

About 20 of us were detained, for the statistics. Naturally plenty of foreigners and those the bourgeoisie seeks to make social outcasts since they’ve committed some misdemeanour in their lifetime. The captain’s report allows me to avoid the charms of the Guardhouse. But the cops particularly want to get me because I mock them. They harass me: “Now or later, we’ll have your hide, old fart”. All day this theme returns, embellished with “The Seine or three bullets .. we’ll get rid of you today!”

8 am – We are caged. The police come to the bars and don’t suspect that to us they are the Zoo animals that we watch behind bars. Amongst ourselves there is fraternity, including the poor pickpockets and those humiliated by this society that we want no more of. The cops press themselves against the bars, insulting and spitting at the prisoners.

Blood drips on the ground. The policemen’s ladies, decked out like pin-ups, come to offer their service and simper with the cops; inspectors walk in the blood with the most supreme indifference. The city police come to seize a prisoner from the cage and a sadist, applauded by his colleagues, sets out to crush his toes with a hammer, starting off symbolically but then less symbolically hits him on the head.

10am – A doctor bravely insists on treating the injured. All the blood-soaked young people and “outcasts” don’t dare say anything. I’m the only one not covered in blood, but the doctor is able to send me to hospital. The police go after him and threatened him with a beating. Four policemen escorted me to the Hotel Dieu. On the way it’s the same “we’ll do you in, old fart!…” An “intellectual” cop gives a “political” analysis: “Wait until it’s like Moscow here, they know how to do it. They’ll eliminate bastards like you. But us, the police, we’re always needed ..We’re not worried, but whatever happens, your number’s up..”

Hotel Dieu: the strike committee “at the service of the public” watches the police car with hostility. I raise up my fist. A young intern immediately makes contact: “Comrade ..” The police want to shove past him. The intern faces them: “Stop, this isn’t your place..” He manages to get me alone while the cops stand guard at the door. He checks that I don’t have a fracture. The comrades are notified, and while the X-rays are developed I tell the thugs: “Now you’re in a jam, if you beat or get rid of me, it’ll be reported.” The cops grumble, and talk amongst themselves, worried. Their badge numbers were recorded when they entered the hospital. When explanations are needed, they will be named, and I will be able to testify that this is only a sample of four, amongst all the police on duty at the 4th that day.

1 pm – I’m taken back to the cage. There’s no-one there but an unfortunate foreigner, who has been arrested because of an unexecuted deportation order. He’s the only human being there and I make him my comrade. He was arrested last night and would like a glass of water. I ask an inspector if he has a right to this glass of water, he shrugs and refuses to even respond.

The cops are lined up clowning around, enjoying a snack. They count their grenades, play the hard-man, and claim they’ll open fire on any gathering of more than 5 people … While the whole city has is covered with rallies at crossroads ..

At 5pm we are taken out of the cage, the foreigner first. The cops (city police) make him kneel down with arms outstretched, state that he’s a bastard, and ask the police’s forgiveness. Then he’s made to get up with a final “caress” ..

Last trip to the police station in the paddy wagon. Some ordinary “civil servants” discuss strengthening the network of informers. A superintendent and his deputy seem capable of asking questions and feigning dialogue, perhaps genuinely.

“What did you attack the captain with?”

“I stand by his report .. In your ranks that night I found only one man who was still a man. Yes, I attacked him and I continue the fight. ”

It can be said of the superintendent that he had the distinction of holding on to the vestiges of humanity with less courage and risk that the captain of the other night, the former resistance fighter, who I salute.

A bit later, in this same police station, in front of the same superintendent, the cops escorting him said: “The quarter has to be burned, completely, it’s the only way to destroy the .. ”

– Good people of the Latin Quarter, our friends, you have been warned!

– Friends, firefighters who faithfully do your job, every person on the barricades is your only true intermediary, they are the only men and you know it … There are fires that are useful to protect us from the brutes. These fires mustn’t threaten the houses that we protect and that protect us. The arsonists are on the other side, together we will get through their straitjacket ..

An immediate task for our young commune is: to organise the fight together and to protect our neighbourhoods from the helmeted hordes of chaos. They are the thugs! 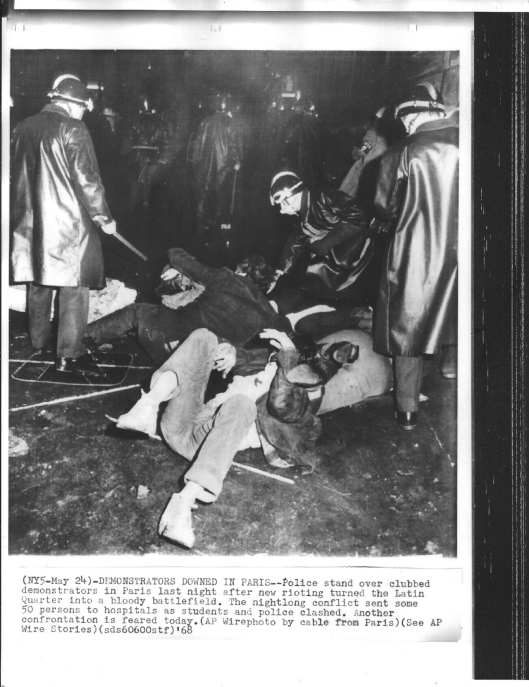 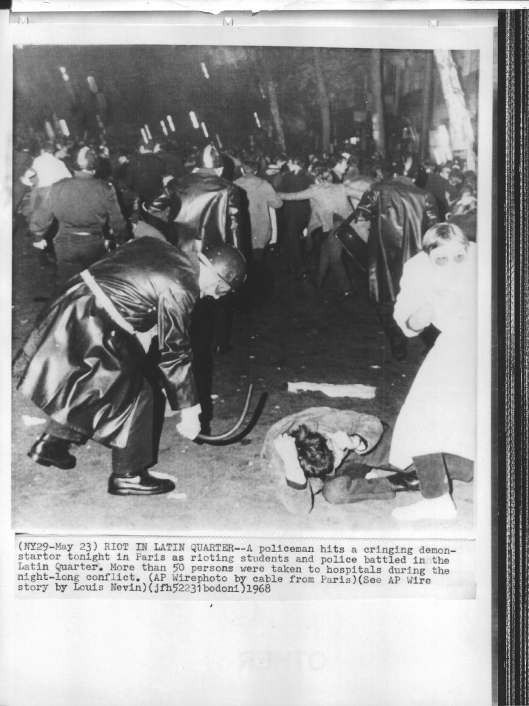 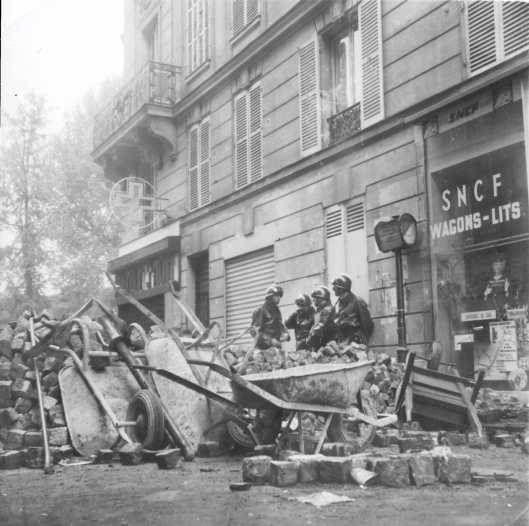 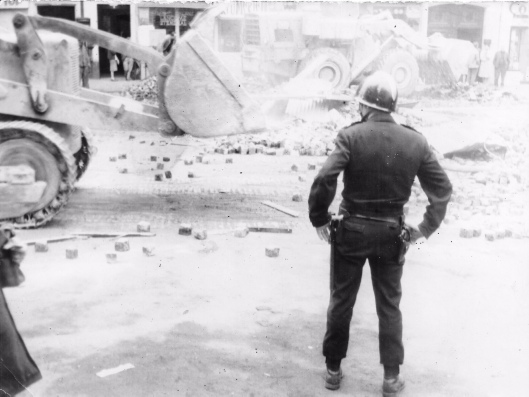 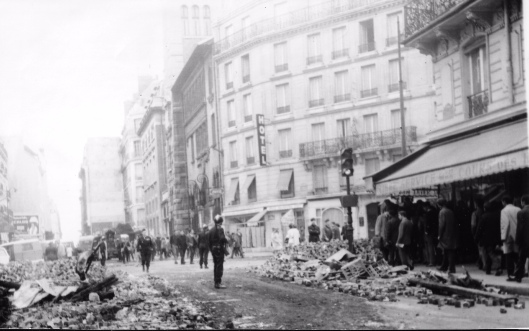 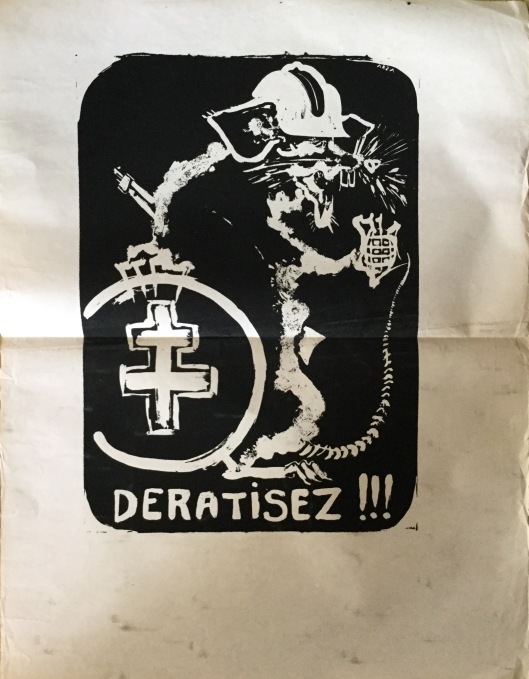 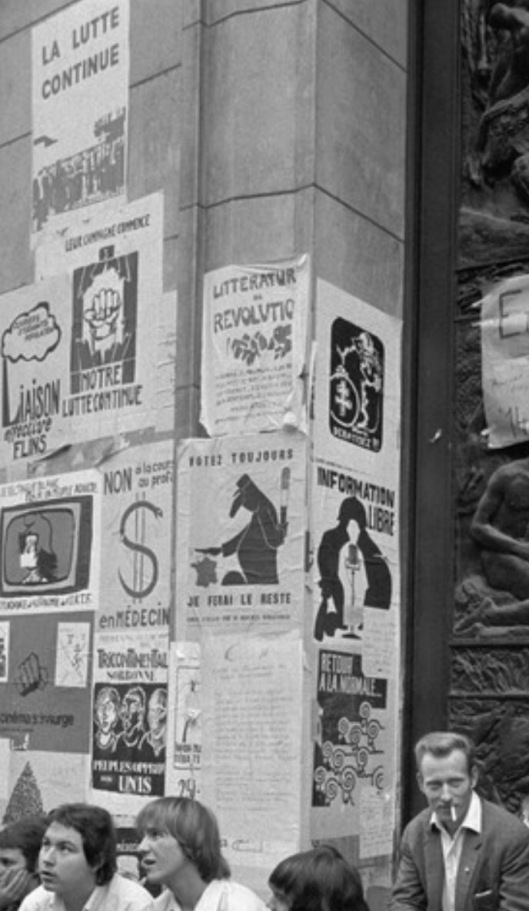 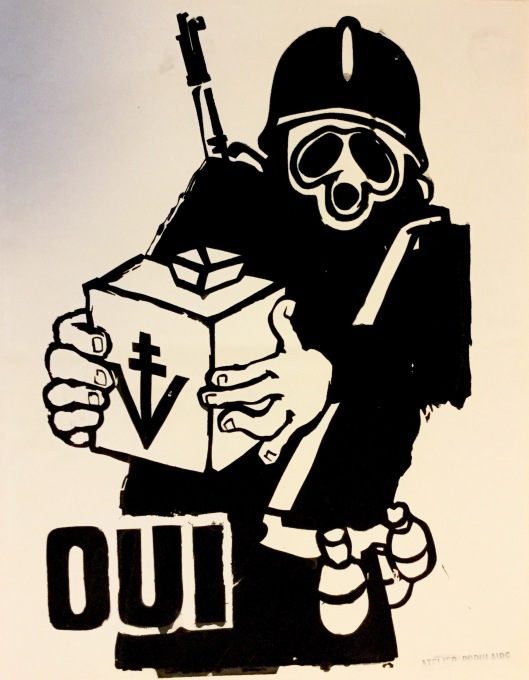 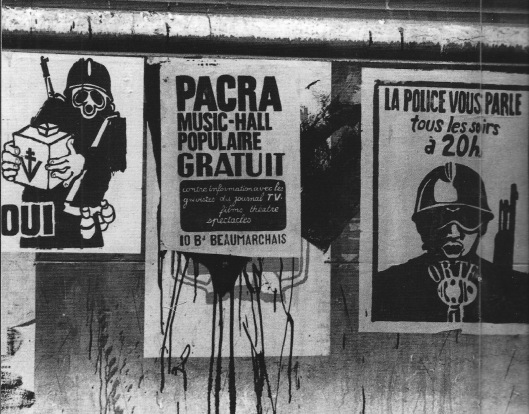 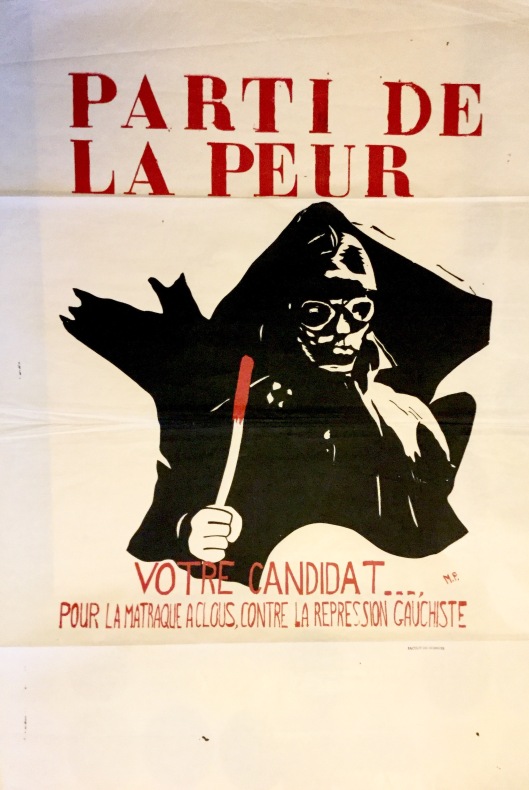 “Party of Fear. Your Candidate… For the studded truncheon, Against Leftist Repression” 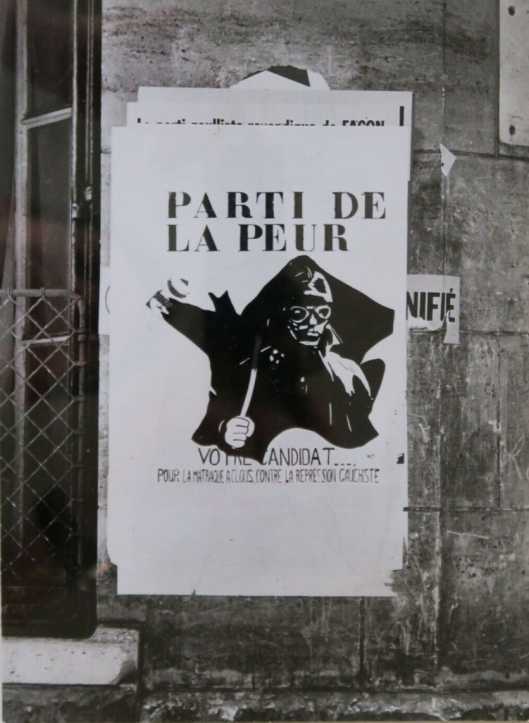 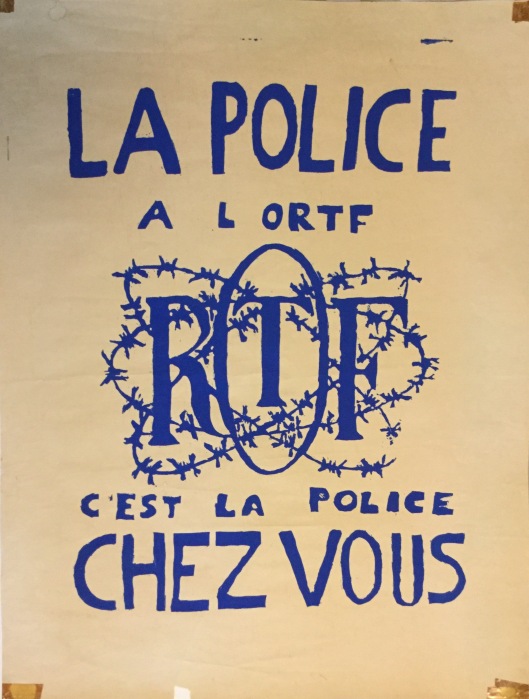 Blue screen-print on newsprint (no stamp) 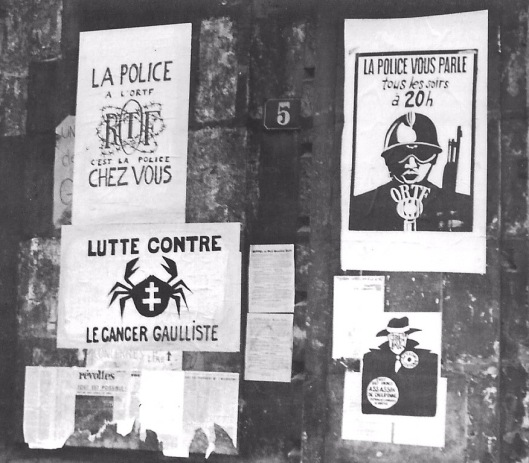 Last night was the opening of the Mai 68 exhibition featuring some of my collection of posters. It is being held at Alliance Français, Brisbane, and continues until July 31.

The highlight of the night for me was being able to show this video made specially for the night by my friend Antoine Grimaud. Antoine was 17 in 1968 when he joined in with the student protests. In the film he shares his feelings and experiences from the time. It’s a fascinating first-hand account.

An intriguing part of his story is that Antoine’s father was Maurice Grimaud – Paris’ prefect of police in 1968. As time has passed Maurice Grimaud has been praised by many (amongst them Daniel Cohn-Bendit) for his handling of what was a very volatile situation in 1968. This is highlighted by the fact that his predecessor was Maurice Papon (Maurice Grimaud had taken over the Prefect’s role in 1967). Papon’s legacy of deaths at the hands of the police under his control (especially in the events of October 17 1961 and Charonne) was still an open wound in France in 1968.

Antoine went on to join the Lettriste group in 1972. One real treat for me in the video is that it is opened and closed with 2 of Antoine’s Letterist poems – so for many viewers this will probably be the first time you will have heard real Letterist poetry. The video is made in a Letterist cinéma discrépant style too – with images and script a-synchronous to each other.

For more information on Antoine & his art visit his website (which, as you might imagine, is in French).