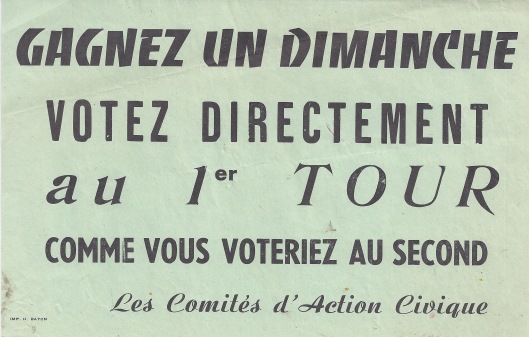 HAVE A SUNDAY OFF

in the 1st ROUND

AS YOU WILL VOTE IN THE SECOND

The Youth take up the Revolution with De Gaulle

This actually the only example of an “response” tract that I’ve come across – it is a right-wing answer (closely following the same formatting even!) to the union tract posted previously.

WE BELONG TO
THE 75% OF
WORKERS

who wish
TO RETURN TO WORK

AND WE will ALL BE BE PRESENT
ON TUESDAY, JUNE 4 to assert
OUR RIGHTS.


UNION OF ST. ETIENNE
FOR THE DEFENSE OF CIVIL RIGHTS 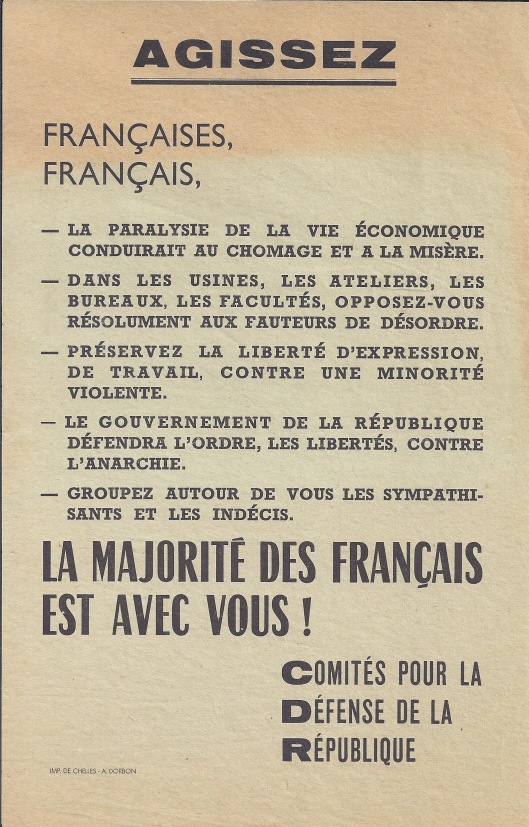 – The present paralysis of economic activity can only lead to unemployment and poverty.
– In your factories, workshops, offices and universities, stand up firmly against troublemakers.
– Protect the freedom of expression and the right to work, against a violent minority.
– The government of the Republic will defend law and order, and your rights, against anarchy.
– Rally sympathisers and all those that are hesitant together.

THE MAJORITY OF THE FRENCH PEOPLE IS WITH YOU!

Committees for the
Defence of the
Republic. 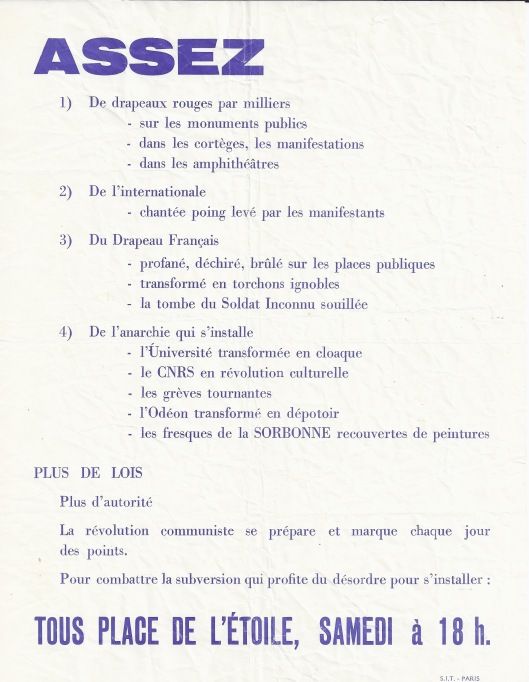 2) Of the Internationale
– being sung by demonstrators with clenched fists

3) Of the French Flag
– being profaned, torn, burned in public places
– being turned into filthy rags
– and the tomb of the Unknown Soldier being defiled

THERE IS NO MORE LAW

Law and order no longer exits.
The communist revolution is in preparation and is scoring more points each day.
To combat the subversion which takes advantage of disorder to establish itself:

“Not this! Instead reform with De Gaulle”

“Don’t be duped! The Republic is always under threat. Join the CDR.”