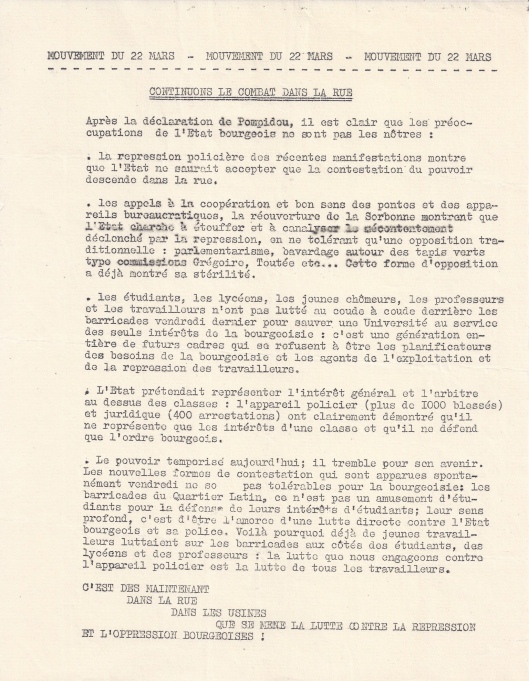 LET’S CONTINUE THE BATTLE IN THE STREET

After Pompidou’s speech, it is clear that our aims and those of the bourgeois state are not the same:

– The police repression of recent demonstrations shows that the state cannot tolerate direct confrontation with the authorities in the streets.

– Appeals for co-operation and to the good sense of the mandarins and various bureaucratic apparatuses, plus the reopening of the Sorbonne, show that the state wants to smother and direct the stream of discontent which has been sparked off by the use of repression by tolerating only the traditional forms of opposition: parliamentarianism, discussion round the fireside of the same type as the Grégoire and Tourée commissions, etc. This form of opposition has already shown its sterility.

– Students, school pupils, the young unemployed, lecturers and workers were not fighting side by side in the barricades last Friday night to save the university for the sake of bourgeois interests: there is a whole generation of future managerial staffs who refuse to be the planners of bourgeois needs or the agents of exploitation and continued repression of the workers.

– The state has presumed to represent the general interest and to play the role of arbiter between the classes: the law (400 arrests) and order (more than 1,000 wounded) apparatus has shown clearly that it represents the interests of only one class and defends only bourgeois order.

– Those in power are biding their time today, they tremble for their future. The spontaneous new forms of confrontation which occurred on Friday are. intolerable to the bourgeoisie: the barricades in the Latin Quarter are not simply an expression of students defending their interests as students, their real point is to encourage others to enter into direct confrontation with the state and its police force. This is why young workers were fighting side by side with students, school pupils and lecturers on the barricades: the battle against the police apparatus is the struggle of every worker.

IT IS IN THE STREET

THAT THE STRUGGLE AGAINST BOURGEOIS OPPRESSION AND REPRESSION CONTINUES!