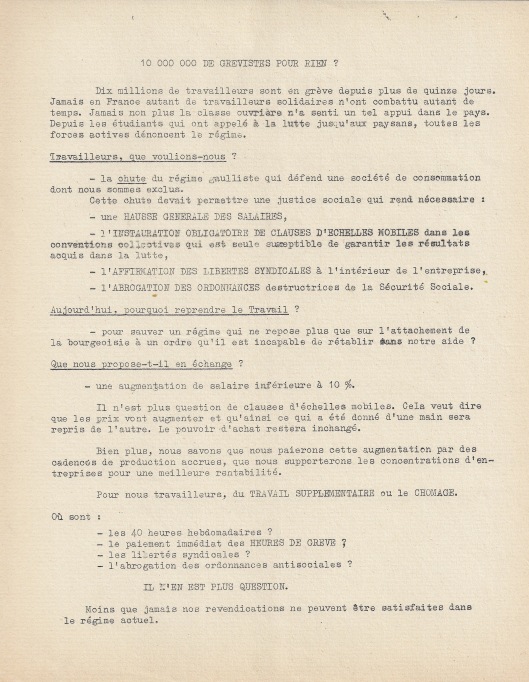 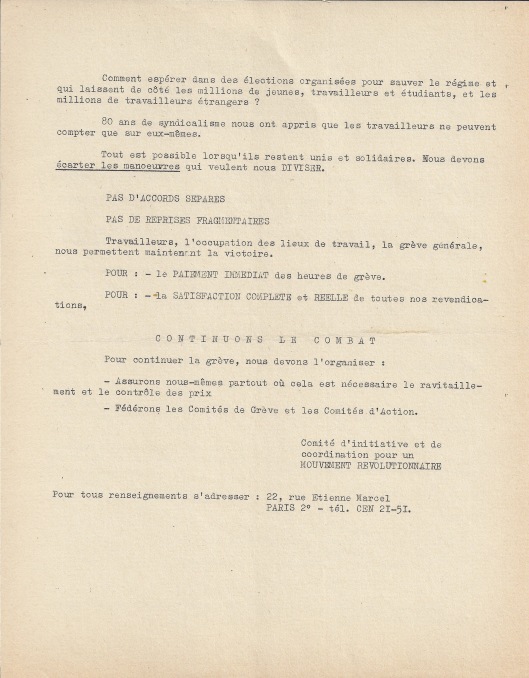 Ten million workers have been on strike for more than fifteen days. Never before in France have so many workers fought for so long in solidarity. Neither has the working class felt such support in the country. From the students who have called for the fight to the peasants, every active force denounces the regime.

Workers, what do we want?

– the fall of the Gaullist regime, that upholds a consumer society from which we are excluded.
This fall must occur to enable the social justice which is necessary:
– a GENERAL INCREASE IN SALARIES,
– the MANDATORY INTRODUCTION OF SLIDING SCALES in collective agreements, which are the only way to guarantee the results achieved in the struggle,
– The AFFIRMATION OF UNION FREEDOMS within the enterprise,
– the REPEAL OF ORDERS which are destructive to Social Security.

Why return to Work today?

– to rescue a régime that no longer rests on the commitment of the bourgeoisie, an order that is unable to be re-established without our help?

What are we offered in exchange?

There is no question of sliding scales. This means that prices will rise so that what is given to one hand is taken from the other. Purchasing power will remain unchanged.

Moreover, we know that we will pay for this increase by increased rates of production, that we will suffer the merger of companies for better profitability.

For us workers, EXTRA WORK or UNEMPLOYMENT.

Where are:
– the 40-hour week?
– immediate payment of wages for TIME ON STRIKE?
– freedom of association?
– the repeal of anti-social orders?

THERE IS NO MORE QUESTION.

It is less likely than ever that our claims will be met under the current regime.

How can we place hope in elections organized to save the regime, and that put aside the millions of young workers and students, along with millions of foreign workers?

80 years of trade unionism have taught us that workers can only rely on themselves.

Anything is possible when we remain united in solidarity. We must demiss the maneuvers which aim to DIVIDE us.

NO PARTIAL RETURNS TO WORK

Workers, the occupation of the workplaces, the general strike, will allow us to achieve victory now.

FOR: – IMMEDIATE PAYMENT of wages for time on

FOR: – FULL and REAL SATISFACTION of all our claims,

To continue the strike, we must organize :

– To secure ourselves the necessary supplies and price controls
– To create a federation of our Strike and Action Committees.

Committee for the Initiation and
Coordination for a
REVOLUTIONARY MOVEMENT