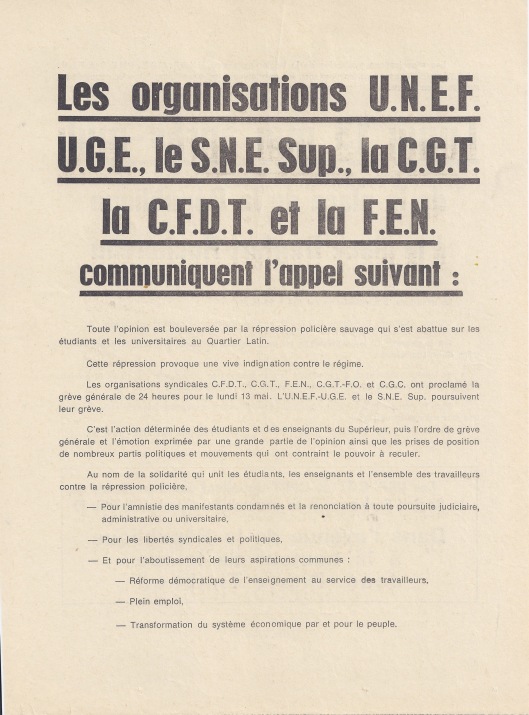 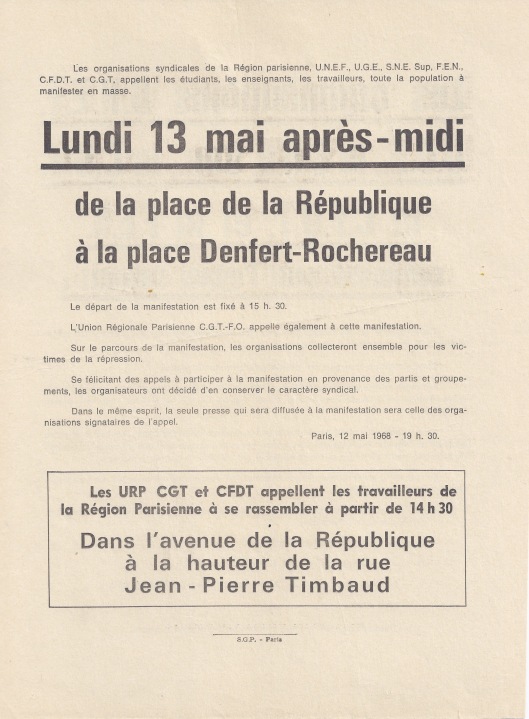 Public opinion has been shattered by the ferocious police repression which has been unleashed against the students and academics in the Latin Quarter.

The repression has provoked spirited indignation against the regime.

It is the determined action of the students and teachers in higher education, followed by the call for a general stake and the emotion expressed by a large part of public opinion as well as the attitudes of numerous political parties and movements that have forced the government to stand down.

In the name of the solidarity which joins together the students. teachers and all the workers against police repression, let us unite.

– For an amnesty for convicted demonstrators and for the revocation of all legal, administrative and academic trials,
– For trade-union and political freedoms,
– And for the success of their common aspirations:
– A democratic reform of education serving the workers,
– Full employment,
– A change in the economic system by and for the people.

The trade-union organisations of the Paris region, U.N.E.F., U.G.E., S.N.E. Sup., F.E.N., C.F.D.T. and C.G.T., call on the students, teachers, workers and all the population to demonstrate en masse.

The demonstration is set to leave at 3.30p.m.

The C.G.T.-F.O. of the Paris region has also put out an appeal for this demonstration.

On the route of the demonstration collections will be made by the organisations, on behalf of the victims of the repression.

In the same spirit, the only papers which will be distributed will be those of the organisations who have signed the appeal.

The URP CGT and CFDT call on the workers of the
Paris Region to assemble from 2:30 p.m.
In the Avenue de la République
at the top of Rue
Jean-Pierre Timbaud