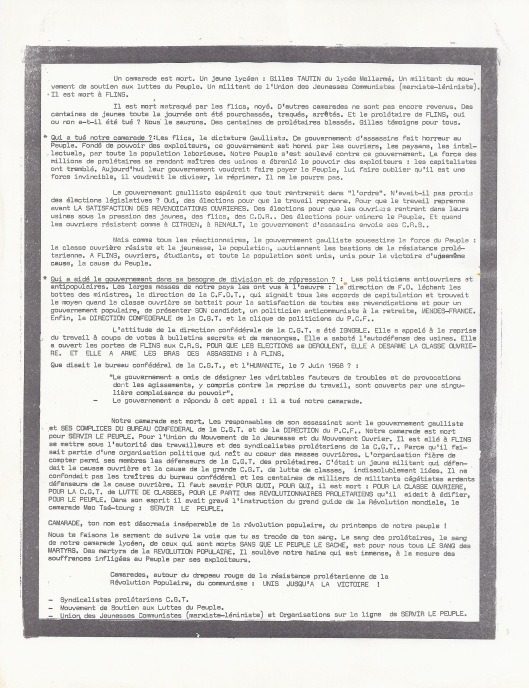 A comrade is dead. A young high-school student: Gilles Tautin, who was at the Lycée Mallarmé. A member of the Movement for the Support of the People’s Struggle. A member of the Union of Young Communists (marxist-leninist). He died at FLINS.

He drowned, having been beaten by the police. Other comrades have still not returned. All day hundreds of young people were chased, hunted down and arrested. And was proletarian FLINS killed, or not? We will find out. Hundreds of proletarians injured. Gilles is our witness.

* Who killed our comrade? : The cops, the Gaullist dictatorship. This government of assassins loathes the People. Built on the power of exploiters, this government is despised by workers, farmers, intellectuals and the whole working population. Our People have risen up against this government. The strength of the millions of proletarians making themselves masters of the factories has rattled the exploiters: the capitalists are trembling. Today their government wants to make the People pay, make them forget that they are an invincible force. It wants to divide them, to repress them. It will not able to.

The Gaullist government hoped that everyone would return to “order”. Didn’t it promise legislative elections? Yes, elections in order that work resumes. So that work resumes before THE SATISFACTION OF THE WORKERS’ DEMANDS. Elections so that workers return to their factories under pressure from the scabs, the cops, and the CDR. Elections in order to defeat the People. And when workers resist as at CITROEN and RENAULT, the government of assassins sends in its CRS.

But like all reactionaries, the Gaullist government underestimates the strength of the People: the working class resists, the youth and the population maintain the bastions of proletarian resistance. At FLINS workers, students, and the whole population are united, united in the success of the same cause: the cause of the People.

* Who has assisted the government in the task of division and repression? : Anti-worker and anti-popular politicians. The vast mass of the country has seen them at work. The leaders of FO, kissing the arses of ministers. The leaders of the CFDT, who signed all the capitulating agreements and who, while the working class was fighting for satisfaction of all of its demands and for a popular government, found a way to introduce THEIR candidate, the retired anticommunist politician MENDES-FRANCE. Finally the NATIONAL BUREAU of the CGT, and the political gang of the PCF.

The stance of the confederated leadership of the CGT was DISGUSTING. It called for the return to work through sham secret ballots. It sabotaged the self-defence of the factories. It opened the gates of FLINS to the CRS. IT HAS DISARMED THE WORKING CLASS SO THAT THE ELECTIONS CAN TAKE PLACE. AND IT HAS ARMED THE ASSASSINS: at FLINS.

What did the Confederal Bureau of the CGT AND HUMANITE say on June 7 1968?:

Our comrade is dead. It is the Gaullist government and ITS ACCOMPLICES IN THE NATIONAL BUREAU of the CGT and in the LEADERSHIP of the PCF who are responsible for his murder. Our comrade died for the SERVICE OF THE PEOPLE. For the Unity of the Youth Movement and the Workers’ Movement. He went to FLINS to put himself under the authority of the workers and proletarian unionists of the CGT. Because he belonged to a political organisation that springs from the working masses. An organisation which is proud to count defenders of the proletarian CGT among its members. He was a young militant who defended the cause of the workers and of the great CGT, permanently linked: the class struggle. He did not confuse the traitors of the national leadership with the hundreds of thousands of CGT militants who are ardent defenders of the workers’ cause. It must be made known FOR WHAT and FOR WHO he died: FOR THE WORKING CLASS, FOR THE CGT of CLASS STRUGGLE, FOR THE PARTY of REVOLUTIONARY PROLETARIANS, which he helped to build, FOR THE PEOPLE. He had etched in his mind the direction of the great guide of world Revolution, comrade Mao Tse-tung: SERVE THE PEOPLE.

COMRADE, from now on your name is inseparable from the peoples revolution, from the springtime of our people!

We pledge to follow the path that you have marked out with your blood. The blood of proletarians, the blood of our high-school comrade and of those who have died WITHOUT THE KNOWLEDGE OF THE PEOPLE, is THE BLOOD of MARTYRS for us all. Martyrs of the PEOPLE’S REVOLUTION. It arouses our hatred, which is immense, to meet the amount of suffering inflicted on the People by its exploiters.

Comrades, around the red flag of proletarian resistance, of the
People’s Revolution, of communism: UNITED UNTIL VICTORY!