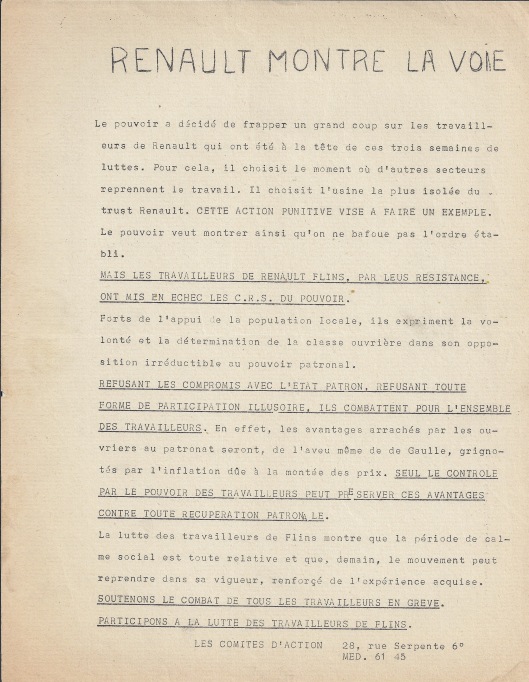 The state decided to make an example out of the workers of Renault, who have been at the forefront of these three weeks of fighting. To do this, it chose the moment when other sectors were returning to work. It chose the Renault corporation’s most isolated factory. THIS PUNITIVE ACT AIMED TO SET AN EXAMPLE. By doing this the state wanted to show that the established order can’t be scorned.

BUT, BY THEIR RESISTANCE, THE WORKERS OF RENAULT FLINS HAVE DEFEATED THE STATE’S CRS

Strengthened by the support of the local people, they revealed the willpower and the determination of the working class in its resolute opposition to employers’ power.

REFUSING TO INCORPORATE THEMSELVES INTO THE EMPLOYERS’ STATE, REFUSING ALL FORMES OF ILLUSORY PARTICIPATION, THEY FIGHT FOR ALL WORKERS. Effectively the benefits snatched by the workers from the bosses will, by De Gaulle’s own admission, be eaten away by inflation owing to rising prices. ONLY CONTROL THROUGH WORKERS’ POWER CAN PRESERVE THESE BENEFITS AGAINST EVERY RECLAMATION OF THE EMPLOYERS.

The struggle of the workers at Flins demonstrates that the phase of social tranquility isrelative and that, tomorrow, the movement can begin again with vigour, strengthened by the experience it has acquired.

LET’S SUPPORT THE BATTLE OF EVERY WORKER ON STRIKE.
LET’S JOIN IN WITH THE STRUGGLE OF THE WORKERS AT FLINS.