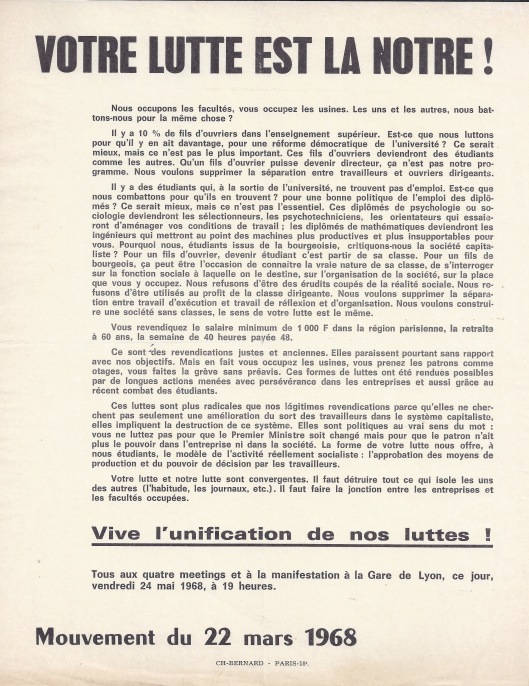 Higher education only contains 10 per cent workers’ children. Are we fighting so that there will be more of them, for a democratic university reform? That would be a good thing, but it’s not the most important. These workers children would just become like other students. We are not aiming for a worker’s son to be a manager, We want to wipe out segregation between workers and management.

There are students who are unable to find jobs on leaving university. Are we fighting so that they’ll find jobs, for a decent graduate employment policy? It would be a good thing, but it is not vital. Psychology or sociology graduates will become the selectors, the planners and psycho-technicians who will try to organise your working conditions; mathematics graduates will become engineers, perfecting maximum-productivity machines to make your life even more unbearable. Why are we, students who are products of middle-class life, criticising capitalist society? The son of a worker who becomes a student leaves his own class. For the son of a middle-class family, it could be his opportunity to see his class in its true light, to question the role he is destined for in society and the organisation of our society. We refuse to besome scholars who are out of touch with real life. We refuse to be used for the benefit of the ruling class. We want to destroy the separation that exists between those who organise and think and those who execute their decisions. We want to form a classless society; your cause is the same as ours.

These are long-standing and just demands: nevertheless. they seem to be out of context with our aims. Yet you have gone on to occupy factories, take your managers as hostages, strike without warning, These forms of struggle have been made possible by perseverance and lengthy action in various enterprises, and because of the recent student battles.

These struggles are even more radical than our official aims. because they go further than simply seeking improvements for the worker within the capitalist system, they imply the destruction of the system. They are political in the true sense of the word: you are fighting not to change the Prime Minister, but so that your boss no longer retains his power in business or society. The form that your struggle has taken offers us students the model for true socialist activity: the appropriation of the means of production and of the decision-making power by the workers.

Our struggles converge. We must destroy everything that seeks to alienate us (everyday habits, the press, etc.). We must combine our occupations in the faculties and factories.

Long live the unification of our struggles !

Everybody to the four rallies and the demonstration at the Gare de Lyon, on Friday May 24 May 1968, at 7 p.m.