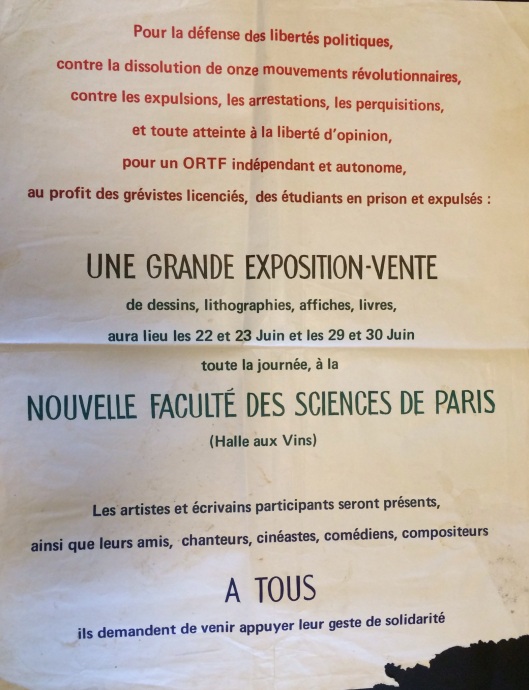 “For the defence of political liberties
Against the dissolution of 11 revolutionary movements
Against the expulsions, the arrests, the police raids
And all breaches of the freedom of opinion
For an independent and autonomous ORTF
For the benefit of the dismissed strikers, the imprisoned and expelled students

A LARGE EXHIBITION-SALE
of drawings, lithographs, posters, and books
will take place on 22-23 June and 29-30 June
All day, at
NEW PARIS FACULTY OF SCIENCES
(Hall of Wine)

The participating artists and writers will be present
together with their friends, singers, film-makers, actors, composers
EVERYONE
is asked to come in support of their gesture of solidarity”

This poster may not be the most visually exciting from May 1968, but it would seem to fill in some missing history. I have known for a while that a number of artists created works to be sold in support of the striking workers and protesting students (amongst them Karel Appel and Asger Jorn). But I had no idea how this was organised – and this looks very much like the answer!